After arriving in Tbilisi, it was time to visit Tusheti, where an equestrian tour was waiting for us.
At nine o'clock in the morning, a comfortable minivan came to the hotel, we packed our bags, sat down, and went in the direction of Tusheti. After a 2-hour drive, the road enters the Stori gorge, from where the 70-kilometer Tusheti road begins,  which is slightly tiring but a road of scenic beauty. After another two hours of driving, we went to the Abano Pass (2960 m). Despite the tiring road, we could no longer feel weariness because beautiful views unfolded in front of us.
The road goes down a deep valley and follows the river from the Abano pass. After a 6-hour drive, we arrived in the village of Shenako, which is distinguished by its houses with balconies and the traditional way of life that has survived till today.

We had dinner at 7 p.m. and went up to the bonfire lit in the center of the village. The night sky of Tusheti deserves to be mentioned especially. The galaxy of the milky way was as clear as if we were observing celestial bodies with a telescope.

We had breakfast at eight o'clock in the morning and started packing horses. We were ready to leave at 9 p.m. Firstly, we visited the village Diklo, where we had a chance to attend the process of making local Guda cheese with the shepherds, tasted Tushetian beer Aludi, and then rode the Sanare pass (2500 m), where beautiful panoramic views unfolded in front of our eyes. Predatory birds were flying above us. The bridge leading to the village of Chigo was damaged, so we took the horses out into the water and crossed the bridge. There is a sacred place in the middle of the village; according to the local's faith it’s a holy place, that is surrounded by small white stones, where entry is forbidden. There is a road from Chigo to Dartlo. We only encountered two cars for the next two hours, which was very comfortable for us and horses.  As we approached the river we stopped at a small meadow where we had lunch and grazed horses. After one hour's break, we visited the village Dartlo, which is on the tentative list of UNESCO World Heritage Sites. In Dartlo there is a court dating back to the 12th century and petroglyphs engraved on the walls of the house, which creates a separate mystical mood.
From Dartlo we went to the village Chesho, where we had dinner and the comfortable family hotel. In the evening, young people from the village lit a fire and gathered around it to share Tusheti stories and adventures. 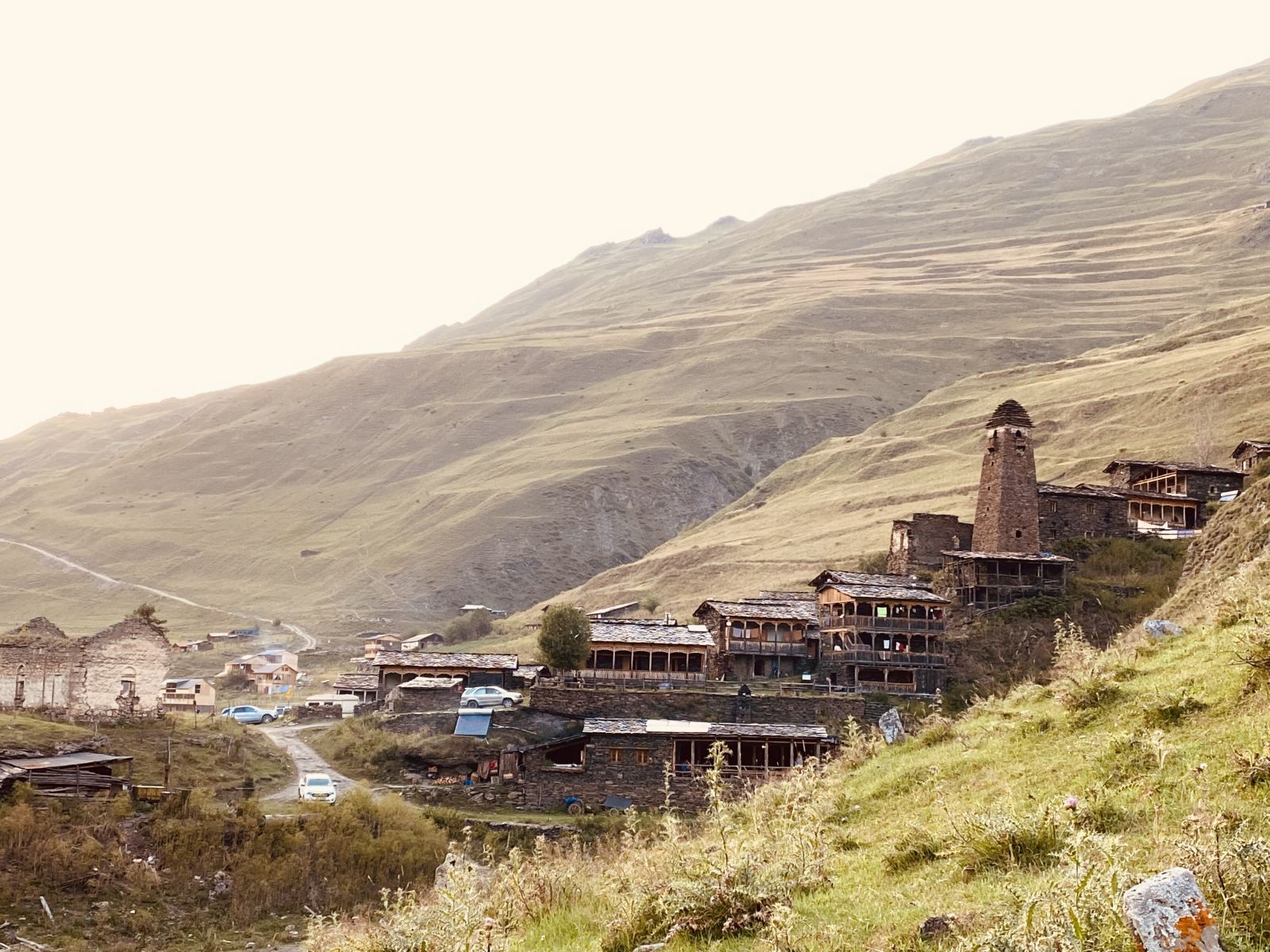 The next day we had breakfast again at 8 o'clock and at 9 we went in the direction of the village Pharsma, where the Nakaicho Pass trail starts. The weather was perfect. Before heading down the pass, we came across wild blueberries on the way, which tasted delicious. We met the cold springs of the mountain on the trail, filled bottles with water, and continued on our way. At 13:00 we were already on the pass, at 3000 meters above sea level, from where beautiful views spread over the two valleys of Tusheti: Pirikiti and Gometsari.

The path from the pass leads to the ridge. When you gallop a horse on a mountain ridge and look at the whole Tusheti from above, you become a part of pristine nature, where you want to return many more times.
At 17:00, we arrived in Mirgvela, where we had pre-booked rooms and hot water in a small family hotel.
On the third day, before leaving for the Kakheti direction, we visited Omalo Castle Towers and the Ethnographic Museum. We were in Tbilisi at 4 p.m.